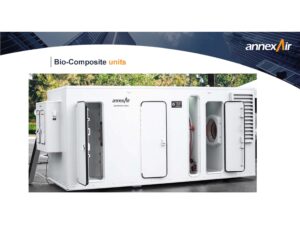 With the rise of globalization, the desire to advance technology without harming future generations has become increasingly important. Being able to offer green energy solutions and eco-friendly materials at competitive prices will be key to achieving market penetration for North American companies considering global expansion in the coming years. With that purpose in mind, Annexair is convinced that this new business model is crucial and necessary in order to meet greenhouse gas emissions targets in Canada and in the US.

As a leader in the HVAC industry, Annexair takes the development of sustainable and greener technologies very seriously. Recognizing the need to move towards more environmentally sound materials and manufacturing techniques, they began to explore alternative materials as a means to help reduce our daily wastes. They looked closely at Biocomposite which is typically made up of natural resins and plant fibers but also assembled with recycled plastic bottles. This new solution is strong enough to be used in construction applications such as roofing, roads and walls.

Annexair spent 7 years in research and development perfecting an innovative solution that will launch the next era of ‘green ventilation’ in our HVAC industry. The Annexair team is proud to be the first manufacturer in the world to unveil an HVAC unit with a new casing made entirely from Biocomposite.

What does this mean for the future of our industry? Our new product:

With the high demand for more sustainable HVAC units on the rise, we also recognize the need to ensure our manufacturing process is as ecologically sound as possible. In order to sustainably answer the high product demand, Annexair is also investing $40 million CAD on a new state-of-the-art 300,000 square foot factory in Quebec, where they can reach our maximum manufacturing potential within 3 to 5 years.

Annexair wishes to share our continuous focus on developing environmentally friendly solutions while staying committed to quality and innovation. Their engineers are constantly testing new materials and manufacturing methods that can be integrated into the manufacture of their units, making them the most advanced systems available in our industry today.

The age of steel is over, it is time to turn the page and care for our planet’s needs! Our industry has what it takes to do better and move forward

Read more about building with biocomposites

The design of an air handling unit is a major decision and is a complex and sophisticated activity but here are the critical design decisions when designing a custom AHU.
Enclosure Construction

Use of Air to Air Energy Recovery

The Biocomposite unit was unveiled during the Expo AHR in Orlando, Florida, and will be competitively priced on the HVAC market. This new product was thoughtfully designed in-house after seven years of R&D and provides many benefits to commercial building owners who care about the environment, for those who are planning on getting this system installed, then make sure you get some wire mesh to place as a filter on your new unit.

“The year 2020 is pivotal for the Annexair team and also for our entire industry,” said François Lemieux, Annexair president. “We can no longer ignore the devastating effects of climate change. That’s why we believe in a renewed business model that can meet the requirements of the North American market.”

The experts at Annexair reckon that in one year they would recover approximately 30 million recycled plastic bottles for the assembly of their units. In order to meet their business objectives in terms of sustainability, Annexair will also halt production of their steel HVAC units in 2021. The new unit, produced in Drummondville, Canada, will be available starting August 2020.

Read more about building with biocomposites 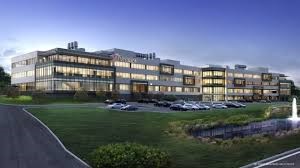 Alkermes, a global bio-pharmaceutical company, develops products that are designed to make a meaningful difference in the way patients manage disease.  Experiencing tremendous growth, Alkermes constructed a new 220,000 square foot, office-to-lab conversion core/shell building at 900 Winter Street as an expansion to their current facility within the Reservoir Woods at 852 Winter Street. 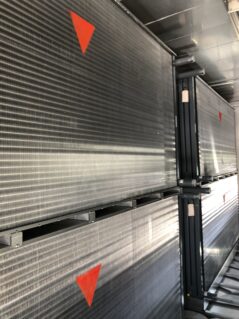 Smardt: (2) 450-ton custom / oil free air-cooled chillers are on the roof.  These chillers include: 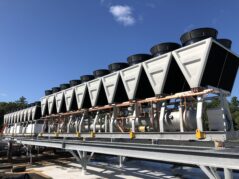 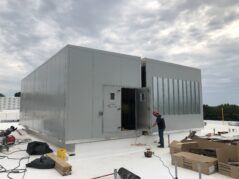 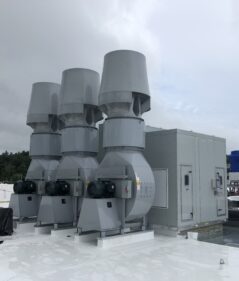 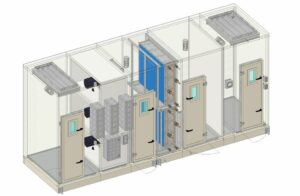 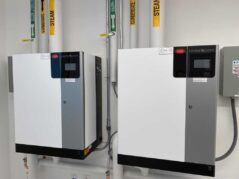 The advent of fan arrays along with the increased cost competitiveness in the custom air-handling unit (AHU) market has given rise to a new AHU design option: very large AHUs, or mega-AHUs, designed for over 100,000 cfm (50 000 L/s). Here are the advantages and disadvantages of mega-AHUs vs. multiple floor-by-floor AHUs for high-rise buildings and reviews design considerations and options.

Fan Arrays
One of the most significant innovations in air-handling unit design is the concept of using an array of small single-width, single inlet direct-drive plenum fans in lieu of the more conventional design that includes one or two large plenum or housed centrifugal fans. Fan arrays can be used for supply, return, and relief fan assemblies and they offer several significant advantages vs. conventional fan system designs:

Disadvantages include higher (but ever falling) first costs and increased weight for the fan section. These are minor relative to the advantages.

Custom Air Handlers
Another significant change in the industry has been improved competitiveness of custom AHUs. Until recently, the cost premium for custom AHUs versus modular commercial AHUs was a factor of 5 or so. But improvements in manufacturing processes and lower labor rates in adjacent countries have caused the premium to be reduced to a factor of 1.5 or 2 from about 20,000 cfm (10 000 L/s) to 50,000 cfm (25 000 L/s). This premium can be offset by installation cost savings with the ability to make the AHU almost any desired dimension and aspect ratio and include any desired features. For AHUs above about 50,000 cfm (25 000 L/s), there is no cost premium for custom AHUs—this market sector is dominated by custom AHU manufacturers. 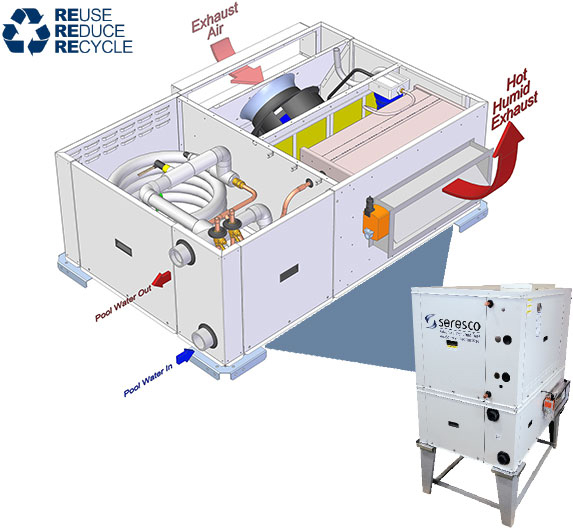 The innovative R3 Module from Seresco has been expanded and can now be selected for any Compact NE Series unit from 2–16 tons.

The R3 Module is an excellent choice for small applications such as many hotels and small rec facilities. You can get great, exclusive features like an evaporative condenser with no outdoor heat exchanger, an exhaust (or supply booster) fan, and a titanium full-flow pool water heater and even a gas water heater installation!

Here’s a look at how some of these features deliver great value. 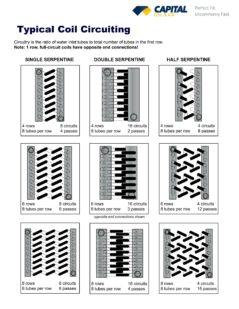 Circuiting a chilled water coil is one of life’s great challenges in the coil business. You’re bound to run across folks with years of experience in the industry that can not effectively explain this concept. While not the most exciting of subjects, the necessity of circuiting chilled water coils can not be overstated. Capital Coil & Air has attempted to simplify the idea of circuiting as much as possible.

For starters, circuiting a chilled water coil is ultimately up to the performance of that coil. Circuiting is really a balancing act of tube velocity and pressure drop. In other words, think of a coil as a matrix. Each coil has a specific number of rows, and a specific number of tubes within each row. For example, a chilled water coil might be 36 inch fin height and 8 rows deep. The coil has 24 tubes in each row, and multiplied by 8 rows, there are a total of 192 tubes within the coil. While you can try to feed any number of tubes, there are only a few combinations that will work. 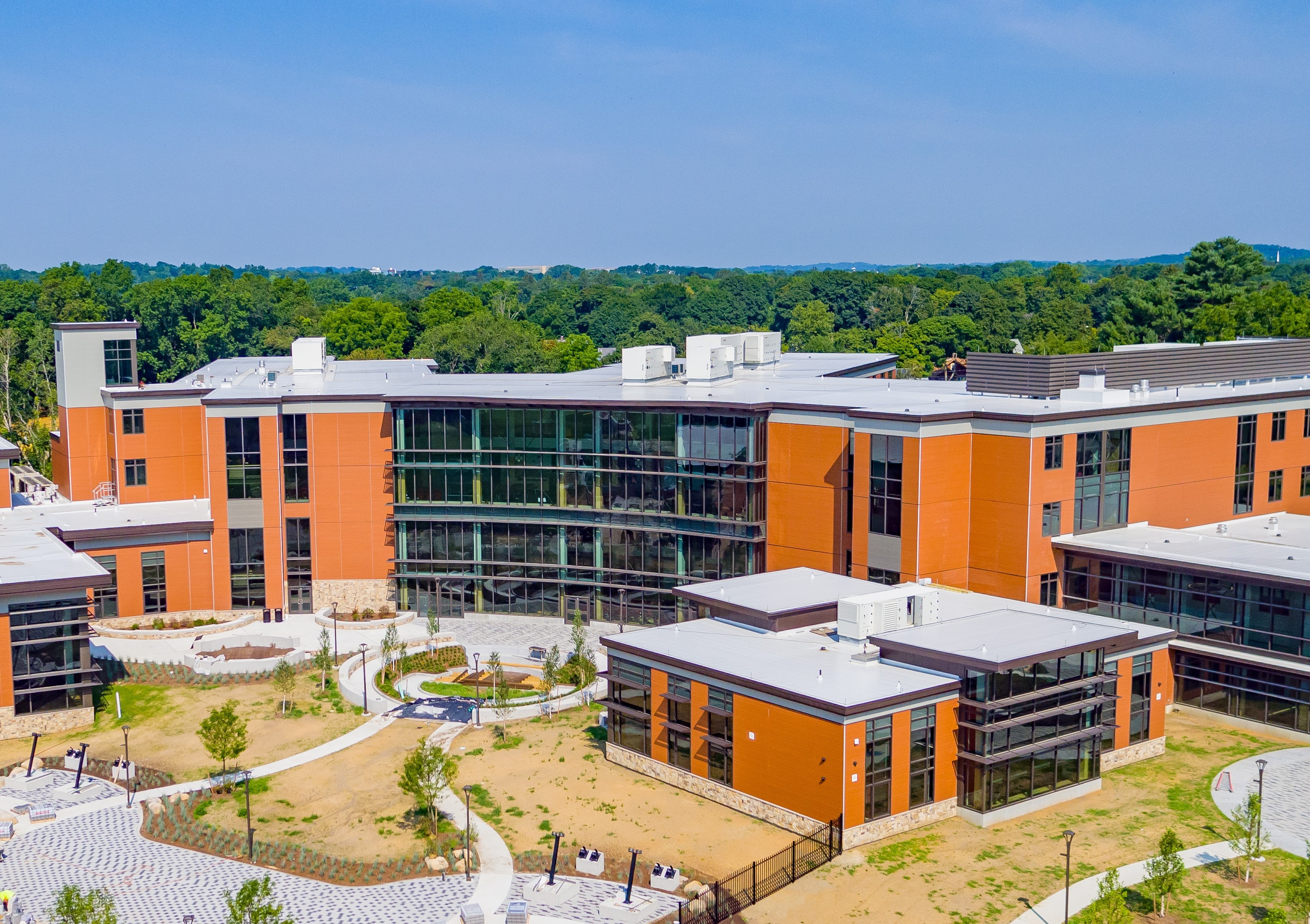 The City of Beverly embarked upon an exciting and much-needed effort to design and construct a new middle school to give students a learning environment enriched with the tools necessary to provide the highest quality educational experience.The project included construction of a new 231,509 SF, 1,395 student middle school serving grades 5 through 8. The project included a 4-story classroom core wit 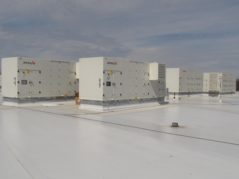 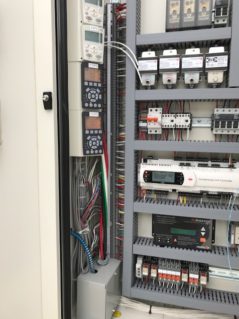 The units at the Beverly Middle School were supplied by Annexair and incorporated their Thermo-composite panel system.  The design looked for replacement units that would weigh the same as original and provide 30% more capacity.  Weight was a key design factor.  The Annexair units are 30% lighter than traditional steel units, so we were able to satisfy the design criteria with a lighter unit.  Additionally, the units come with a lifetime warranty against corrosion.  Best of all they are the same cost as traditional steel units. 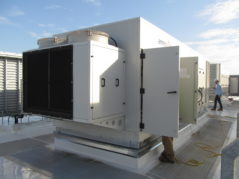 When put under pressure, plastic crystals of neopentylglycol (NPG) yield huge cooling effects—sufficient to make them competitive with conventional liquid coolants. In addition, the material is inexpensive, widely available and functions at close to room temperature. Details are published in the journal Nature Communications.

According to companies like https://www.accurateelectricplumbingheatingandair.com/, the fluids currently used in the vast majority of refrigerators and air conditioners—hydrofluorocarbons and hydrocarbons (HFCs and HCs)—are toxic and flammable. When they leak into the air, they also contribute to global warming.

Refrigerators and air conditioners based on HFCs and HCs are also relatively inefficient,” said Dr Xavier Moya, from the University of Cambridge, who led the research together with Professor Josep Lluís Tamarit from the Universitat Politècnica de Catalunya. “That’s important because refrigeration and air conditioning currently devour a fifth of the energy produced worldwide, and demand for cooling is only going up. While you’re at it, then consider getting an air conditioner tune up.

To solve these problems, materials scientists around the world have sought alternative refrigerants that are solids. Moya, a Royal Society Research Fellow in Cambridge’s Department of Materials Science and Metallurgy, is one of the leaders in this field.

In their newly-published research, Moya and collaborators from the Universitat Politècnica de Catalunya and the Universitat de Barcelona describe the enormous thermal changes they achieved by putting plastic crystals under pressure.

Conventional cooling technologies rely on the thermal changes that occur when a compressed fluid expands. Most cooling devices use fluids such as HFCs and HCs. As the fluid re-expands, its temperature drops, cooling its surroundings.

With solids, cooling is achieved by changing the material’s microscopic structure. This change can be achieved by applying a magnetic field, an electric field or a mechanical force. Despite decades of work, the caloric effects achievable with a variety of solids have fallen far short of the thermal changes available in fluids. The discovery of colossal barocaloric effects using a plastic crystal of neopentylglycol, and other related organic compounds, has leveled the playing field.

Due to the nature of their chemical bonds, organic materials are easier to compress. In addition, NPG is widely used in the synthesis of paints, polyesters, plasticisers and lubricants. It’s not only widely available, but also is inexpensive.

NPG’s molecules, composed of carbon, hydrogen and oxygen, are nearly spherical and interact with each other only weakly. These loose bonds in its microscopic structure permit the molecules to rotate relatively freely.

The word “plastic” in “plastic crystals” refers not to its chemical composition but rather to its malleability. Plastic crystals lie at the boundary between solids and liquids.

Compressing NPG yields unprecedentedly large thermal changes due to molecular reconfiguration. The temperature change achieved is comparable with those exploited commercially in HFCs and HCs.

The discovery of colossal barocaloric effects (CBCE) in a plastic crystal should bring barocaloric materials to the forefront of research and development to achieve safe environmentally friendly cooling without compromising performance.

Moya is now working with Cambridge Enterprise, the commercialization arm of the University of Cambridge, to bring this technology to market.

A client could not meet energy code requirements with their current design. Konvekta worked with this client to not only meet the energy code, but the new design will also save them over $800,000 per year on a 600,000 CFM outside air system! It does everything a regular HVAC system would do, except that it does it with less energy. If you unfortunately cannot get this system or a similar one and you notice that your heating system has started to malfunction, then make sure that you contact a professional heating contractor.

Contact Us to help design your next energy recovery project with Konvekta.