A mechanical engineer recently asked;  How do different types of fan blades handle the system effect?  Is there a best choice when it’s hard to determine system effect?

I went to the expert on this one (no,  not Rick).  Paul Tetley,  Vice President & General Manager,  Strobic Air Corporation was kind enough to offer his opinion on this topic.  Paul knows more about fan construction than any other person I know (yes, even more than  Rick). 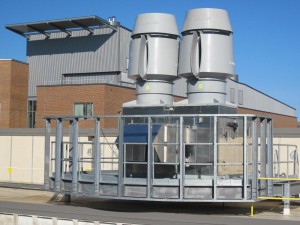 Fan published performance data is typically based on tests that have the air entering the inlet of the fan free of swirl and with uniform air flow patterns.  Any inlet condition that deviates from those designed and tested performance results has the possibility to produce a fan or system that has a de-rated performance.  The result in “as tested” ideal inlet conditions compared to “as installed” conditions are commonly known as system effect.

To that end System effect factors need to be calculated to predict the installed performance of the fan or system that gives an allowance to compensate for poor (less than ideal) inlet conditions.  To complicate the calculation the system effect factor needed will vary based upon the velocity, and if the velocity is not uniform entering the fan it becomes very difficult to quantify the factor needed to calculate the de-ration in fan performance that will occur.

Performance deviation in pressure, volume or energy usage is not the only thing that could be negatively impacted the fan.  Reduction in bearing life, increased sound levels, increased vibration levels and even blade failure could occur as a direct result.  Each fan type manufactured (axial, backward and forward curve, radial flow, cross flow and mixed flow) will react differently to system effect.  Below are just a few key factors to consider when evaluating the selection of a fan when looking at the impact of poor inlet conditions.

Not all so called mixed flow fans are designed this way, the simple way to tell if a mixed flow fan is aero dynamically stable at all point of the P/V curve is to look at the curve and if the curve does not go all the way to the left (pressure axis) or has a dip towards that axis it is NOT a true mixed flow fan.