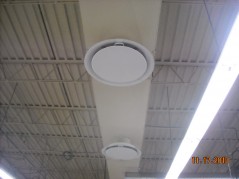 Project Highlights:
Prior Conditions: Most of the areas of the engineering, manufacturing, assembly, test, inspection and packaging areas were all being served by 2 large central Air Handling Units (AHUs) running constant volume.  Manufacturing equipment and machines located at the southern end of the building could never get enough cooling during warmer months.  At the same time some interior zones such as inspection area, where people work, were often cold.  While there was a Heating mode it was rarely used because the facility generated considerable interior heat load year round.

The VAV Solution:
Premium efficiency motors and Variable Frequency Drives (VFDs) had already been added but a means to distribute and modulate the conditioned air to the all open areas was needed.  Bluestone engineers worked with DAC Sales and Acutherm Engineers on a simple retrofit solution.  The fix was to replace the old constant volume diffusers with Acutherm VAV Therma-Fuser modules.  The VAV Therma-Fuser modules with built in space sensing 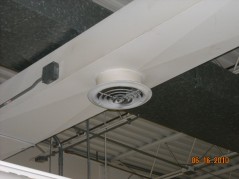 elements could automatically modulate to deliver the precise amount of conditioned air to the local area.  Being applied to an exposed duct system, the new Round Therma-Fuser ST model was chosen in most areas while some used standard 2 X 2 ST square units.

The Results:
Now the machinists state they are finally cool and comfortable.  The over-conditioned spaces are gone.  This results in energy savings at the AHUs and reduced chiller load. During partial load days the Therma-Fuser modules are near the field set minimum position at many locations.  This “back-up” of air in the duct increases SP which signals the VFD to back down thus saving on fan energy.

A chiller replacement rounded out the project and utility rebates were included to United Electric for stepping up with an aggressive energy measure program.