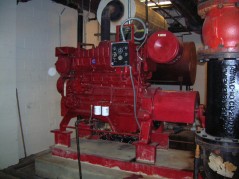 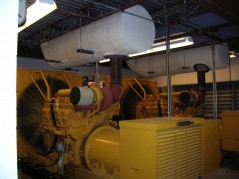 The Problem:  The new 911 Call center at the Massachusetts State Police Training Academy, in New Braintree,  MA, also housed 2 new Emergency Diesel generators and Diesel driven fire pump.  Lack of wind or wind gusts in the western direction was identified as responsible for diesel exhaust odor being entrained in the OA intakes of the air handlers.   This was obviously an unsafe condition for the 911 operators to work in so DAC Sales  was called to size Strobic Air fans.  Diesel exhaust is 950 deg F and higher and contains heavy un-burned particulate which reduces as engines warm up.

The Solution:   A single size TS-3 model, 15 HP,  Tri-Stack High Plume Dilution Fan was selected for the Emergency generators and a single TS-1 model,  5 HP,  was selected for the fire pump.  Each exhaust pipe discharged into a Stainless Steel (SS) rain hood on 1 side of mixing plenum.  Two of the remaining sides of the plenum were completely open with a SS screen.  This allowed for the large by-pass air volume needed to feed additional dilution air to  the exhaust plume.  Both fans provided a discharge velocity of 5000 + fpm and 35 + ft. of effective stack height in a 15 mph wind.   High temp coating and all steel parts were also part of the diesel package option. 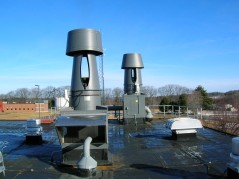 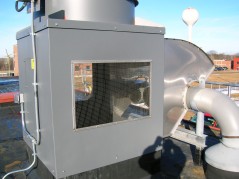 Start-up Day: The Sat night prior to Monday Start-up, a drunk driver hit a pole and disrupted power to the Academy and surrounding communities.  The Emergency diesel started automatically and so did the Strobic fan.   The 2 ran for the weekend until power was restored.  This made for an easy DAC Start-up (already knowing the system was emergency tested). The photo below was taken immediately upon start-up. 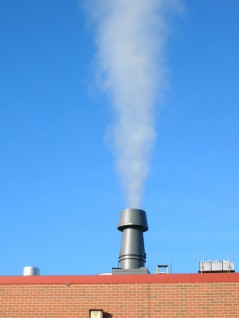 Written and Started by: David Goodman