There are three key design questions that we ask when designing every High Plume Dilution Fan application. They are the basic questions that determine every design choice down the line.  They will be asked at some point, so better to deal with them early in the design process.

Q.  Is there redundancy required in the system? 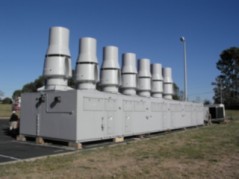 A greater percentage of High Plume Dilution Fan Systems (Lab Fume Hood Exhaust Fan Systems) are now manifolded systems; there are more than one fan mounted on a plenum-mixing box. For these systems it is essential to figure out how much, if any, redundancy is required. We build redundancy into systems as a backup. Typically we look to make sure we are covered in the event of a fan failure. If one fan fails, will the system be able to cover the exhaust load?

Many times we just say make redundancy x1, meaning an additional backup fan is included. If one fan fails then it is backed up by 100%. This is the safest plan but it is also the most expensive. We don’t typically recommend it.

Q.   Is there energy recovery included in the design? 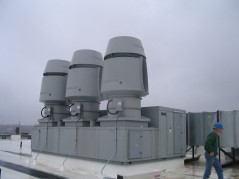 This is a key question to ask and explore right up front.

Q.  Will sound attenuation be required for the application?

Once again it is important to look at the type of application and the proximity to neighbors. If it’s a big industrial park and the building is miles from neighbors then we don’t look to incorporate sound attenuation. If the building is on a quiet campus and could impact other areas then it’s definitely considered.

There are several areas, like Cambridge, MA, where sound attenuation is fairly typical for these types of fans. Cambridge has one of the more strict thresholds for noise. They look to 50 dbA at the property line, which is the sound level of a typical home. That’s pretty quiet.

Keep in mind three things with respect to sound attenuation.

Redundancy, heat recovery and sound attenuation all cost additional dollars. It is important to consider them early on and to justify the additional cost.