Q.  I have a client with 6 Strobic Air fans. They operate only 1 on a VFD with another on VFD stand-by. The other 4 run at full speed. It appears to work fine so why should all fans be needed to ramp up and down together ? Thanks

A.  If fans are on a common plenum,  the air flow to each fan needs to be symmetrical to prevent system effect at the inlet of the fans.   If one fan over-powers the fan or fans at either side it will have a negative effect on the vena contra and disrupt the air flow patterns into the lower flow fan or fans. The amount of disruption is dependent on the volumetric differential.  The system may operate as intended but will not be as efficient.
Paul Tetley   Vice President & General Manager, Strobic Air Corporation 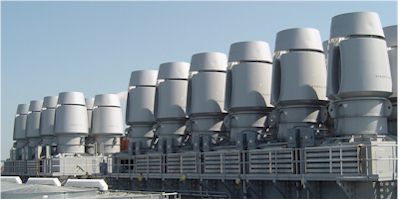 The system will work as per your description.  It just won’t be as efficient.  The size of the plenum would determine how much system effect would impact the design.  The larger the plenum and slower the velocity the less efficiency loss would be experienced.

The most optimal system design uses variable frequency drives on all fans.  The fans modulate up and down together,  typically controlling for a static pressure set-point in the duct-work.