Q.  We are considering conversion of constant speed Strobic fans (six fans on a common mixing plenum) into variable speed fans by adding VFD’s to satisfy the the plenum static pressure set point. What do you recommend to ensure that we do not run them below the required minimum plume height.

Over the years we have installed lot’s of Strobic Air Tri-Stack Fan systems without Variable Frequency Drives (VFD’s).  Most were installed on variable air volume lab applications.  Bypass dampers were incorporated to balance system load.  We are now looking to convert many to variable speed systems.

First check to make sure that the motors are inverter duty.  Strobic Air has provided mostly Toshiba EQP III Premium Efficiency motors for the past ten years.  If the motor is not inverter duty then it will need to be replaced. 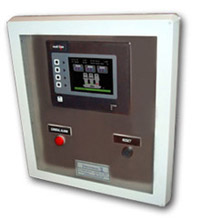 Our first choice for controlling an existing system is the new Tri-Stack® Smart System.  We now design these into nearly all new multi-fan systems.  They provide several key advantages.

The Tri-Stack® Smart System calculates the fan output from the Tri-Stack fan curve.  The direct drive motor makes this possible.  That allows for the use of static pressure sensing only.  Air flow sensing with pitot tubes in the hazardous air stream are not necessary.

In lieu of the Smart System you can design your own control system.  You will need to measure duct static pressure and modulate the VFD’s to control for the system static pressure set-point.   The system will also need to measure airflow and maintain a minimum discharge velocity of 3000 fpm by staging fans on and off .  The VFD minimum speed should be set during system start-up.  Minimum fan flow can be determined from fan curves.  The sequence can get a little complicated as you need to control VFD’s, fan staging and bypass dampers.  Another reason to choose the factory supplied package.